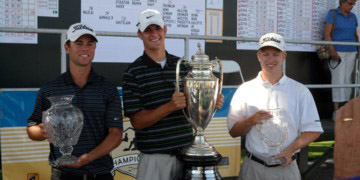 Grant Rappleye could have laid up, hit a lazy flop shot and two-putted for the win. But the Sacramento State junior ripped a 5-wood 240 yards to within 18 inches of the final hole Monday and tapped in for an eagle to take the 86th California State Fair Men’s Amateur Golf Championship on the Alister MacKenzie course at Haggin Oaks.

Rappleye recorded eight birdies, the eagle and just one bogey Monday in his three-shot win. For the tournament, he had two bogies and one double bogey to finish 16 under.

Not bad for a young man who almost gave up golf last year when his game left him and he was shooting in the 90s.

“I was playing so horribly that I took two weeks off last year and enjoyed it,” said the Elk Grove resident. “My dad said if I quit playing he’d understand. But I came back and changed my swing completely and went from a draw to a cut. I took my hands completely out of the swing, and it’s really worked for me.”

He muscled up on his second shot on 18. Already holding a one-stroke lead over Colfax’s Patrick Bauer, Rappleye could have stayed away from the treacherous trio of pot bunkers protecting the green on the right and the large bunker on the left and laid up. But Rappleye said he used his hips and legs to blast the ball 240 yards right down the middle. The ball ran an inch by the cup and stopped 18 inches behind the pin.

“I looked at the pin set sheet and knew that it was set up perfectly for my cut,” Rappleye said. “I was never going to lay up because even if I missed the green I figured I’d be no worse than par and I’d make Patrick have to eagle (for the win.)”

Bauer’s 6-under 66 gave him a second-place tie with Fresno’s Pace Johnson at 203. Johnson entered the final round with a five-stroke lead at 14 under. But the Cal Poly San Luis Obispo sophomore ran into trouble on the back nine that cost him the tournament. He closed with a 73 after a 66 and 64.