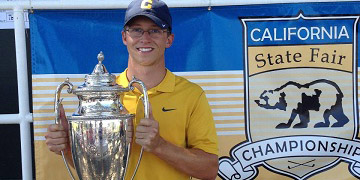 A spectator who had set his chair left of the 17th fairway Monday at Haggin Oaks was surprised to see a ball roll toward him, then stop 20 yards short of his spot in the shade.

No surprise, the ball belonged to Brandon Hagy, who was clinging to a one-shot lead in the final round of the California State Fair Amateur Championship. Hagy, a 21-year-old Cal junior, is reputed to be the longest hitter in college golf.

But despite its 340 yards, the drive didn’t do Hagy much good on the 545-yard par-5 that is No. 4 in the course’s usual configuration. The ball was on hardpan, with low-hanging tree limbs directly in front of him and a lake between him and the green 200 yards away.

To complicate matters, Max Homa, who had birdied No. 16 to pull within a shot of Hagy’s lead, was in the middle of the fairway.

Hagy didn’t hesitate. There would be no laying up.

“There was no discussion,” he said. “I knew Max was going to stuff it in there.”

Hagy aimed right of the tree, over the middle of the lake, closed the face on his 8-iron and trusted his natural draw.

With the ball in midflight and turning left as Hagy planned, he beseeched it to “be right.”

It was. The ball ended up 25 feet from the hole, and the resulting two-putt birdie propelled Hagy to a final-round 5-under-par 67 and a one shot win over Homa (66), a Cal senior. Cal sophomore Michael Kim (66) finished third, another shot back.

The three Bears are ranked in the top 40 among college men. Cal, which begins its season Sunday in Minnesota, is ranked sixth.

“It feels pretty good,” Hagy said of the Bears’ sweep of the top three spots. “And it’s no surprise.”

In his State Fair debut three years ago, Hagy hit his second shot into the water on No. 17 before eagling No. 18 to force a playoff in which he lost.

The resident of Westlake Village has come a long since then.

Hagy redshirted during the 2010-11 season to work on his short game and focus on gaining admission into Cal’s Haas School of Business. He returned to the team to finish in the top 20 in 12 of 13 stroke-play events last season and climb 200 spots in the national rankings. He advanced to the semifinals of the U.S. Amateur last month. He has the best grade-point average on a team that has the best GPA of any of Cal’s men’s athletic teams.

But it was his evolution as a more complete player that ultimately made the difference Monday.

“That was the turning point,” Hagy said.

Hagy’s three-round total of 16-under 200 was one shot off the tournament record. He couldn’t afford a stumble if he was to hold off Homa, who birdied Nos. 11 and 13 and the final three holes.

Knowing he probably needed an eagle on No. 18 to tie, Homa hit a laser-like second shot directly at the pin, but a bad hop spit his ball to the back of the green, 60 feet from the hole. He crouched in the fairway in frustration.