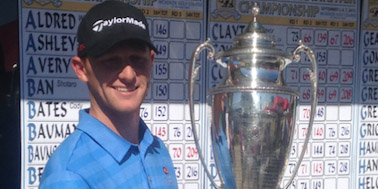 There’s no way a contender can know exactly where he stands in relation to the field at an amateur golf tournament.

He can have an idea. He can know relative to his group. But there are no full-field scoreboards so, for the most part, it’s put the pedal to the metal and hope for the best.

He chipped in for an eagle from in front of the green on the par-5 No. 18. That was good enough to get him into a playoff with Jooho Lee, who birdied the final two holes.

“I tried to give it a run, and it went in,” Clayton said of his chip-in.

Both players birdied the first three playoff holes. Clayton got his name on the trophy when Lee missed a 4-footer for birdie on the fourth playoff hole.

Lee, 19, a Nevada sophomore, closed with a 70. He had the tournament by the throat for most of the day.

While most everyone around the lead tumbled from contention on the difficult front nine, Lee was solid. When he birdied No. 11, he was 10 under par and four shots clear of any player on the course and two shots better than Lee Gearhart, the longtime clubhouse leader who shot a 63 teeing off almost three hours ahead of the leaders.

With such a big lead and two friendly par-5s to finish, Lee seemed a cinch. But that was before wayward tee shots on Nos. 13 and 14 led to bogeys. He said nerves weren’t an issue.

Lee hit his second shot on the par-5 17th hole (No. 4 as Haggin is typically configured) over the green and onto hardpan. Facing a nearly impossible shot over a hump and to a green that sloped away toward water, Lee clipped the ball perfectly. He made the ensuing 10-foot birdie putt to get within a shot of Clayton, breaking from his stoic demeanor with a fist pump.

“The best shot I hit all week,” Lee said.

Lee forced a playoff by getting up and down for a birdie from 10 yards right of the 18th green.

In the playoff, which alternated between Nos. 1 and 18, both par-5s, both players had tap-in birdies on the first three holes. Clayton hit the green in two shots on all four playoff holes. On No. 18 the first time through, he blasted a 3-iron from 260 yards that ended up 20 feet from the hole.

At a powerful 6-foot-4, Clayton resembles PGA Tour pro Henrik Stenson in the way he compresses the ball and makes the club look almost toothpicklike in his hands. The transfer from Stanislaus State said he wasn’t shocked by his victory, but he wasn’t necessarily expecting it, either. He did say it was the highlight of his golf career.