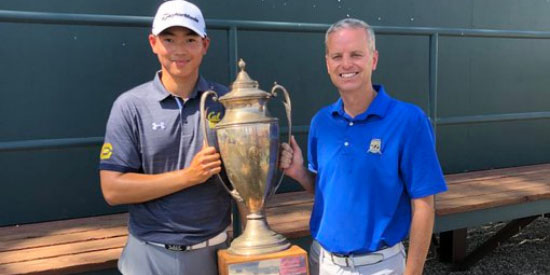 If Tony Chen felt the entire field at the California State Fair Championship was breathing down his neck on Monday, he wouldn’t be to off base.

Chen proved to be a worthy frontrunner in winning the 97th playing of the “State Fair” on Monday at Haggin Oaks Golf Club in Sacramento. The Cal freshman carded rounds of 66-70-67 for a 13-under score of 203, good for a one-stroke victory over five golfers, including collegians Ethan Davidson, Baron Szeto, Mateo Fuenmayor, a top junior in Connor Reis, and a seasoned mid-amateur, Cullen Brasfield.

An opening round of 66 (-6) left Chen tied for third place at the completion of play on Saturday, as Fuenmayor, a sophomore at Oregon State, and Szeto, who will play collegiately at Cal Poly, bolted out of the gates with rounds of 62 and 64, respectively.

Fuenmayor and Szeto couldn’t match their blazing first round pace and came back to the pack after carding rounds of 70 and 73 on Sunday.

Numerous players were well within striking distance of the lead heading into Monday’s final round. Davidson, a junior at Sacramento State, opened his final round with five straight birdies on his way to a closing 65 (-7). Szeto, who won the Alameda Commuters championship in April, closed with a 67 while Fuenmayor finished with an even par 72. Brasfield, a former Nevada golfer who has won the last two Palm Springs Championships at PGA West, closed with a 68.

A final round 67, which featured six birdies and just one bogey, gave Chen a narrow victory and a big dose of confidence as he prepares for his first season of competition at Cal.

A six-foot tall Australian citizen originally from Shenzhen, China, Chen graduated a semester early from the prestigious IMG Academy. Over the past four years, he has produced five individual medalist honors and has finished in the top 10 14 times. Additionally, he earned a spot as a Rolex AJGA All-American Honorable Mention in 2018 and was named to the AJGA Scholastic Honor Roll in 2019.

Chen was also highly touted in the junior golf rankings. He ended his prep career ranked 131st by AJGA and has ranked as high as 24th and 39th by Golfweek.

In July, Chen won the Silverado Amateur by four shots on the North Course at Silverado Resort in Napa, Calif., finishing at 6-under 210 for the 54-hole event with rounds of 71-69-70.