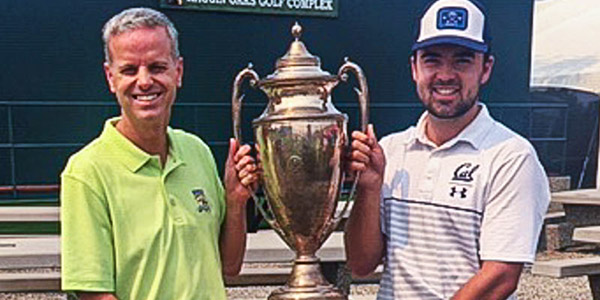 Finigan Tilly of San Carlos, California battled the heatwave that engulfed the West Coast en route to a one shot victory over Brett Viboch and Blake Hathcoat at the 96th California State Fair Amateur.

Tilly, who was one of six co-leaders following Saturday’s first round, posted 67-68-67 for a 202 total. The Cal-Berkley senior sat one shot off the overnight leader, Hathcoat, who posted the low round of the tournament (64) on Sunday.

Hathcoat strengthened his lead on the first five holes of the final round with birdies on hole Nos. 1, 3, 4, and 5 to get to 14 under par for the tournament. Able to keep Hathcoat within arms reach, Tilly nabbed consecutive birdies on Nos. 2 and 3 to get to 11 under.

Gaining another shot as the pair made the turn, Hathcoat held just a one shot advantage. As the two headed to the 14th tee, Tilly took control, getting to 14 under with back-to-back birdies on Nos. 12 and 13 to take the lead.

Unable to gain any traction, Hathcoat saw his lead slip away as he came back to the clubhouse with 11 consecutive pars to close out the championship.

After a one under par front nine, Brett Viboch made a run at Tilly as Hathcoat treaded water. Alternating birdies and pars over the final eight holes, Viboch came home in three under for a four-under 68, but ultimately finished one shot short along with Hathcoat at 13 under par.

In Sunday’s second round, Tilly’s bogey on the par-3 14th led to four in a row. On Monday, he again bogeyed the 14th but this time he didn’t waver, rebounding with two pars and a birdie at the par-5 17th to give himself a one shot cushion heading to the par-5 18th. With Viboch in the clubhouse and Hathcoat unable to birdie the par-5 finisher, a par gave the Cal Golden Bear the championship.

The two-time defending champion, Devon Bling of Ridgecrest, Calif. and UCLA, shot a final-round 67 to finish tied for 18th at 7 under par.

Scoring was excellent throughout the three-day weekend, with 41 players finishing the tournament under par for 54 holes.