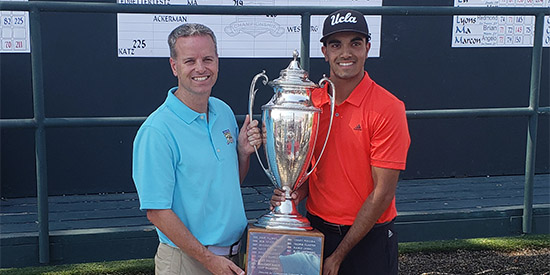 For Bling, it was a continuation of the momentum gained from a memorable run at the U.S. Amateur at Pebble Beach two weeks ago. Bling won five straight matches before falling in the final to the hottest player in the field, Viktor Hovland of Norway.

Cohn, the reigning Northern California Mid-Amateur champion, started the final round with a one-shot lead over Bling and first-round leader Lucas Carper (San Jose, Calif.). When Bling suffered back-to-back bogeys at the third and fourth holes, Cohn found himself two ahead of Carper and three ahead of Bling.

Carper would fade out of contention, but Bling would get within one shot of Cohn by the turn, and then pass him with two birdies to start the back nine. Bling would make three more birdies coming in to stay ahead for good.

Playing two groups ahead, Oregon State’s Shawn Lu (Honolulu, Hawaii) made a strong run, going six under through 11 holes and briefly taking the lead at 12 under. But back-to-back bogeys at thirteen and fourteen knocked him backward, and by the time he finished with two straight birdies for a 66, it was too late to catch Bling. Bling finished at 14-under 202, with Lu (pictured with Bling) two shots back.