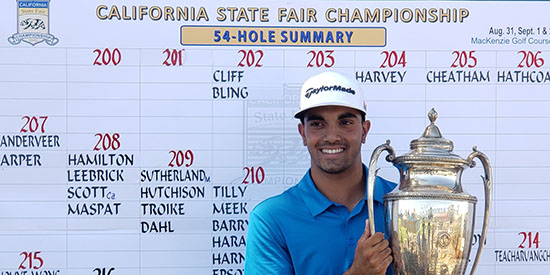 Slowly but surely, Devon Bling chipped away at a title defense in the California State Fair Amateur. With three birdies in his final four holes at the Alister MacKenzie Golf Course at Haggin Oaks in Sacramento, Calif., Bling pulled even with second-round leader Michael Cliff. He finished him off in sudden death.

Bling becomes the first champion to defend his title since Robert Hamilton won back-to-back events in 2000-01. It didn’t come easily. Bling was still four shots back by the time he hit the back nine on Monday. When he birdied Nos. 10, 11 and 12, he reached 12 under, good for a three-way tie with Cliff and Berk Harvey.

Both Cliff and Bling hit the par-5 17th in two, and both two-putted for birdie. On the very last hole, a par 5, Cliff reached the green in two and had 60 feet for eagle. Bling, meanwhile, mishit his second shot into the bunker and left himself a 30-yard bunker shot. He hit a deft sand shot to about 7 feet. Cliff proceeded to roll his eagle putt to 3 inches, and posted 14-under par. Bling then calmly made his 7 footer to tie at 14 under

On the par 5 first, the first extra hole, both players pounded it down the fairway and had about 210 yards from the pin. Cliff hit a mid-iron to 40 feet. Bling purely struck his mid-iron to about 6 feet from the hole.

Cliff rolled another clutch putt, leaving it 3 inches short of the hole. Bling had a tricky putt for eagle that appeared to break to the right. Bling, however, knew the putt was straight and rolled it right into the center of the hole for eagle to win.

Since last year’s State Fair victory, which came a week after his runner-up finish at the U.S. Amateur, Bling has made a Masters start and a U.S. Open start. He is about to begin his junior season at UCLA.

Harvey finished solo third behind Cliff and Cal’s Jamie Cheatham was fourth at 11 under. Blake Hathcoat, who plays for St. Mary’s, rounded out the top 5 at 10 under.